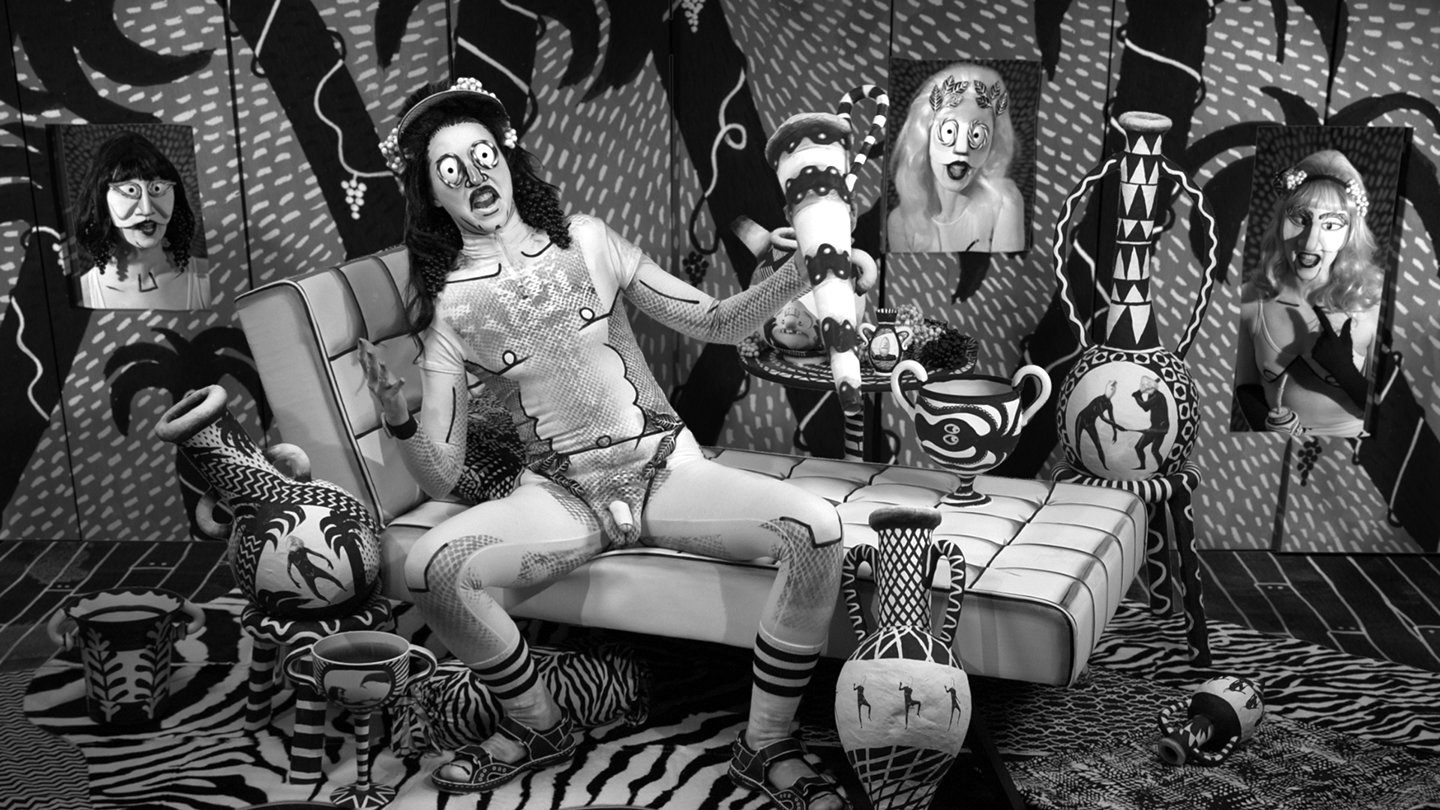 In her Minotaur Trilogy, Mary Reid Kelley revives ancient mythological characters such as Dionysus, Ariadne, and Daedalus, refreshing their narratives of drunkenness, sexual deviancy, and betrayal with a grotesquely comic feminist twist.

At the center of the sprawling cast (all played by the artist herself) is the Minotaur and her mother Pasiphae, speaking their desires in the riotous, pun-filled verse which hallmarks Reid Kelley’s distinctive writing. In Priapus Agonistes (2013), we meet the titular hero Priapus at a volleyball game, where he wins the right to hunt the hapless Minotaur, who lurks in her Labyrinth under the gymnasium, dreaming of a reunion with her family. Swinburne’s Pasiphae (2014) reveals how the Minotaur was conceived by her mother Pasiphae, with an unethical assist by the master artisan Daedalus. The text of Pasiphae, written in the 1860s by the decadent Victorian poet Algernon Swinburne, yet never published during his lifetime due to its obscene theme, is a testament to the enduring presence of mythological characters in art from Dante to Picasso.

The Thong of Dionysus (2015) ends the trilogy in a philosophically bawdy frenzy, led by the god of wine and three Maenads, as they praise drunkenness and proposition the abandoned Ariadne to join them on the island of Naxos. In the Labyrinth, Priapus finally finds the Minotaur, dead of a broken heart. Priapus mistakenly falls in love with the monster’s corpse: “I like a sense of humor in my honey / I love a joke, and you smell funny.” His declaration of devotion in the Labyrinth, and Ariadne’s attempt to find, in the Maenads’ phrase, “a raisin to live”, conclude Mary Reid Kelley’s tragicomic mash-up of the myths and voices that haunt the millennia.

Mary Reid Kelley’s work has been exhibited internationally including recent solo exhibitions at the Baltimore Museum of Art, MD; MUDAM Luxembourg, Belgium; the Tate, Liverpool, UK; Kunsthalle Bremen, Germany; the Hammer Museum, Los Angeles, CA; the Institute of Contemporary Art, Boston, MA; and The Contemporary, Austin, TX among many others. Mary Reid Kelley and Patrick Kelley’s video work has been reviewed in The New York Times, The Los Angeles Times, W Magazine, La Reppublica, Vogue, The New Yorker, Artforum, Flash Art, Frieze, ARTnews, and Art in America. Mary and Patrick live and work in upstate New York. Their 2016 video, This Is Offal, won the Baloise Prize at Art Basel in 2016.

Mary Reid Kelley graduated with an MFA from Yale in 2009. She has received numerous awards for her work including a 2016 MacArthur Fellowship; a Guggenheim Fellowship, Joseph H. Hazen Rome Prize, a Louis Comfort Tiffany Foundation Biennial Award, and an AICA Award in Best Time-Based Format (performance, video film, sound) for “Mary Reid Kelley: Working Objects and Videos,” Samuel Dorsky Museum of Art, SUNY New Paltz, New Paltz, NY, Curated by Daniel Belasco, among many others. Her work is in the collections of the Whitney Museum of American Art, the Yale University Art Collection, The Goetz Collection in Munich, Germany, and the UBS Art Collection in New York, NY, and the Hammer Museum, Los Angeles, CA.