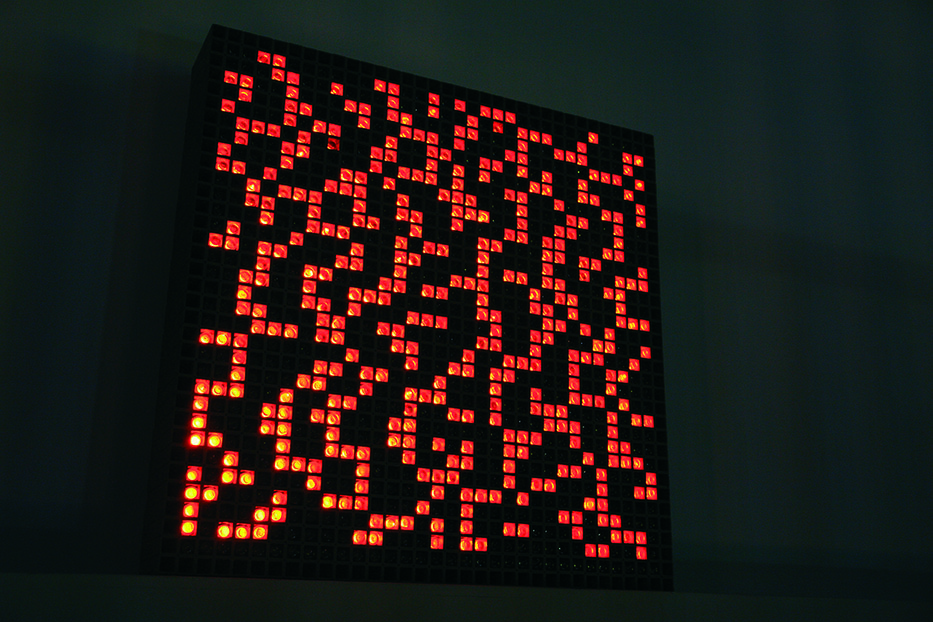 Vladimir Bonačić was born in 1938 in Novi Sad in the former Yugoslavia. Bonačić grew up in Zagreb, Croatia and studied electronics at the Faculty of Electrotechnics at the University of Zagreb. In 1962 Bonačić began his scientific research at the Institute Ruđer Bošković (IRB), Zagreb. Bonačić conducted his postgraduate work in London and Paris. After earning his Ph.D. in 1968 from the University of Zagreb, he started to apply computer systems to Cybernetic Art. Bonačić participated actively, theoretically, and practically, in the collaboration between the IRB and the Gallery (today Museum) of Contemporary Art in Zagreb on the introduction of computers in art in the projects of [New] Tendencies, which soon developed into a unique international avant-garde artists’ movement. Bonačić exhibited his first works at Tendencies 4 in 1968. The International Competition Jury of Tendencies 4 in 1969 devoted one of the prizes to Vladimir Bonačić for his Cybernetic Art. From 1969 – 1973 he headed Laboratory for Cybernetics at IRB.

In 1971 Bonačić became advisor to the Assistant Director-General for Natural Sciences at UNESCO, Paris on Art and Science matters. Bonačić founded the “bcd CyberneticArt team” with Miro A. Cimerman and Dunja Donassy as spin-off from [New] Tendencies. Their ongoing exploration, continued through the years, on the holistic unity of artist, art work & computer, and spectator – a utopian idea in the 1960s, became a technological reality in the 1970s by the arrival of Single Board Computers. This opened a new paradigm in creative partnership in artistry. In 1971/1972 he was Principal Investigator of the Research Grant from NBS, National Bureau of Standards, Washington D.C.

From 1972 – 1977 Bonačić was the founding director of the international “Jerusalem Program in Art and Science” at Bezalel Academy of Arts and Design, Jerusalem under the auspice of UNESCO and in close cooperation with Hebrew University, Jerusalem. In 1973 Bonačić became a member of the Editorial Advisory Board of Leonardo, Paris. In 1975 half of the Erasmus Prize was devoted to Jerusalem Program in Art and Science. In 1978 Bonačić became a member of the “Croatian Association of Artists” and the “Association of Artists of Applied Arts of Croatia” in Zagreb. From 1978–1979 Bonačić directed the development of the “Multimedia and Electronic Library” (MEL) at the National and University Library, Zagreb.

In 1980 Bonačić moved with the bcd team to Germany, where the team pursued their work in art, design and information science, and undertook R&D projects primarily in visual communication used by German Television for election night reporting and other socio-political surveys. In 1985 Bonačić became a corresponding member of European Academy of Arts, Sciences and Humanities, Paris. In 1987 Bonačić was invited speaker at the Colloquium
“The Scientific Dimension of Cultural Development” with the lecture “A Transcendental Concept for Cybernetic Art in 21st Century” and together with bcd team exhibited the Cybernetic Installation “Instantaneous”.  Under the auspice of Academy and UNESCO it was hosted at the Accademia Nazionale dei Lincei, Rome.

In the 1990s Bonačić worked on European projects on digitization of European Heritage and virtual exhibitions. After Vladimir Bonačić’s early death in 1999, Dunja and Miro continued the bcd team activities.

“CyberneticArt is seen subjectively as the art that will be able to reflect our insights… so that the computer technology that is available and being developed today will help advance human freedom and not subject people to new forms of alienation.”