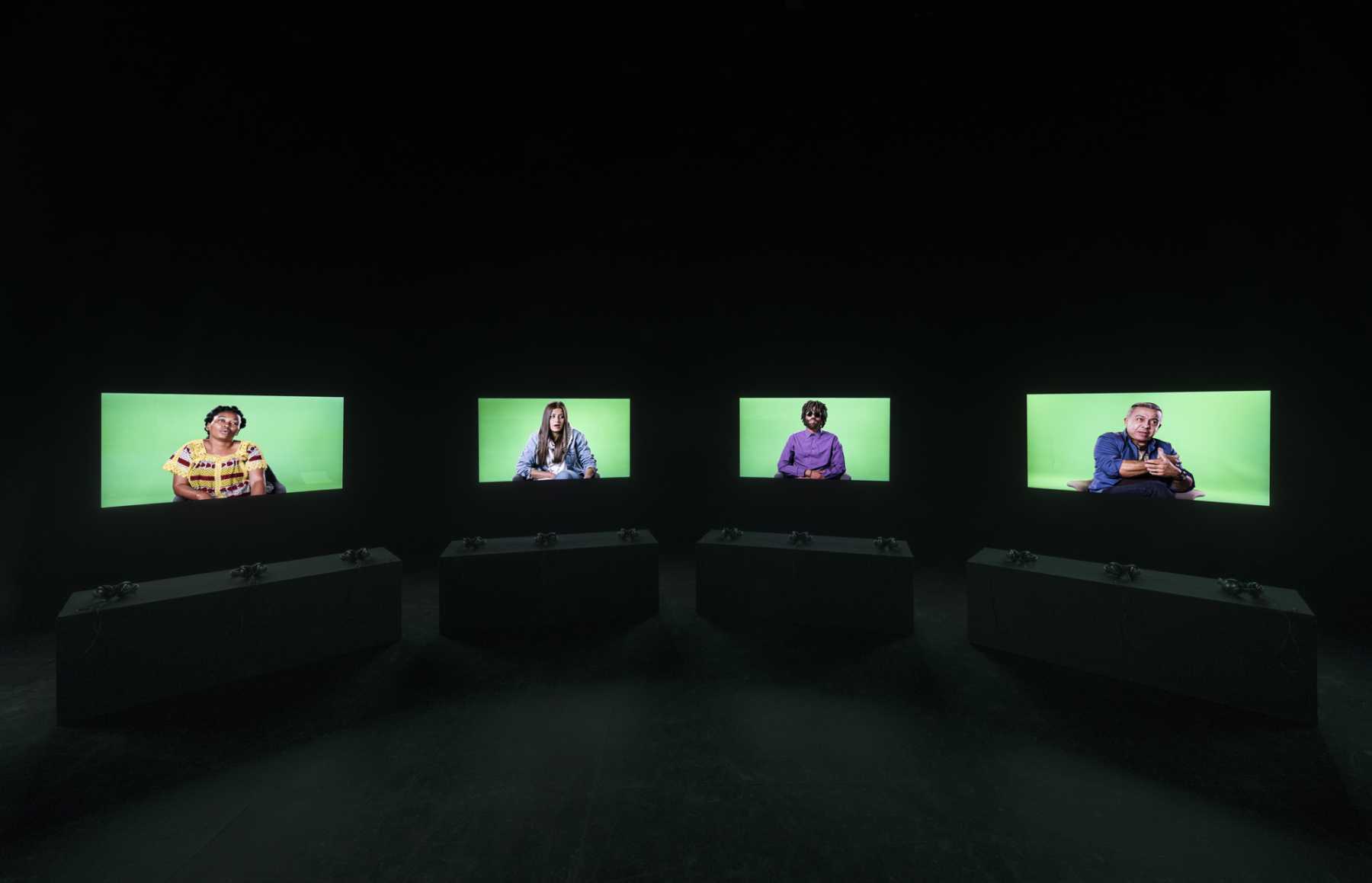 Through video, installation, and photography, Candice Breitz (b. 1972, Johannesburg) reveals how identities are represented and upheld in popular visual culture. Her 2016 video installation Love Story, which debuted at the 57th Venice Biennale, documents the stories of six refugees—Farah Abdi Mohamed, Sarah Ezzat Mardini, Luis Ernesto Nava Molero, Shabeena Francis Saveri, Mamy Maloba Langa, and José Maria João—whose accounts are subsequently adapted and reenacted by actors Alec Baldwin and Julianne Moore. The interviews took place in the locations where each refugee either sought or was granted asylum (Cape Town, Berlin, and New York) and were taped on a green-screen set, situating them anywhere and nowhere simultaneously. The sitters recount their experiences of displacement by war, persecution, and violence, confronting viewers of Love Story with real, lived suffering told by those who experienced it. Baldwin and Moore deliver polished, innocuous imitations in comparison—without accents, without urgency, and without anything to lose.

By bringing this installation out of the gallery environment and into an active black box theater in historic Playhouse Square, FRONT brings current issues of population migration and the refugee crisis to the fore in one of the cultural centers of the city.

Candice Breitz is a Berlin-based artist whose moving image installations have been shown internationally. Throughout her career, she has explored the dynamics by means of which an individual becomes him or herself in relation to a larger community, be that the immediate community that one encounters in family, or the real and imagined communities that are shaped not only by questions of national belonging, race, gender and religion, but also by the increasingly undeniable influence of mainstream media such as television, cinema and other popular culture. Most recently, Breitz’s work has focused on the conditions under which empathy is produced, reflecting on a media-saturated global culture in which strong identification with fictional characters and celebrity figures runs parallel to widespread indifference to the plight of those facing real world adversity.

Breitz holds degrees from the University of the Witwatersrand (Johannesburg), the University of Chicago, and Columbia University (NYC). She has participated in the Whitney Museum’s Independent Studio Program and led the Palais de Tokyo’s ‘Le Pavillon’ residency as a visiting artist during the year 2005-2006. She has been a professor at the Hochschule für Bildende Künste in Braunschweig since 2007.

presented with support from