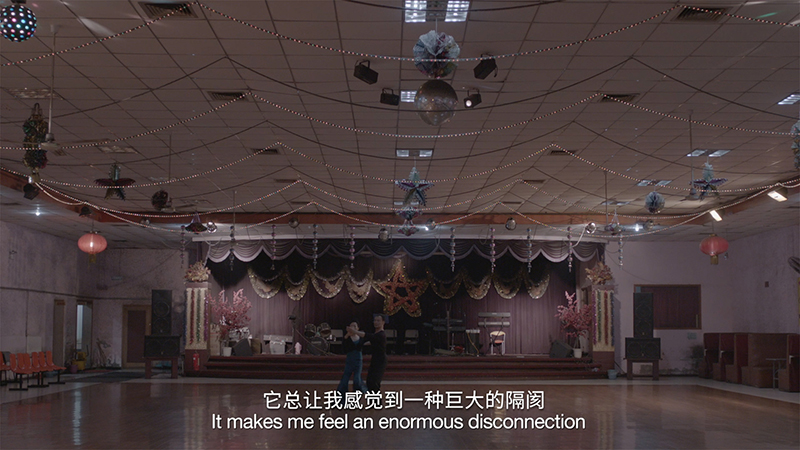 Since 2012, Hao Jingban has been conducting research and filming for her Beijing Ballroom project. She traces the present ballrooms in Beijing to the two waves of ballroom dancing in the early 1950s and the post-Cultural Revolution era in late 1970s. During the three years of filming, Hao attempts different video languages to explore these interweaving historical narratives. Five works are produced from the Beijing Ballroom project: Little Dance (2012), An Afternoon Ball (2013), I Can’t Dance (2015), Off Takes (2016) and Over-Romanticism (2016). In 2016, Hao won the Huayu Youth Award Grand Jury Prize in Art Sanya 2016 with An Afternoon Ball and Off Takes from Beijing Ballroom project.

Little Dance, 2012
Total run time: 14:08
At the end of the 70s, right after the Cultural Revolution, a social dance fever emerged in Beijing. In the 80s, almost all the political events had been reflected in the social dance scene, where there were ups and downs for ballrooms, as well as for dancing participants. The ballroom was more an abstract space, in which an entire era and generation were crystallised. In Little Dance, Hao intended to let this abstract time slip into narrative of the ballroom. She used very slow long shots, and tried to generate a feeling of mixed eras with the interior of a constructed space while mimicking the composition of the portrait photography from the 70s and the 80s. Back then, she was particularly interested in the women in the ballroom. The moment they dress themselves up, step out of their most private spaces and walk into the ballroom, is a suspended moment between a real and unreal instant alone, and another real and unreal instant that is social but somewhat in isolation from the outside world. Hao felt that this very moment could be used to represent her impressions of the ballroom then.

An Afternoon Ball ,2013
Total run time: 25:21
An Afternoon Ball tries various approaches to apply image as means of narrating history. An Afternoon Ball is an observation and documentation of the ballroom. In the mean time of representing a regular ball, it attempts to present the abstract space formed by the dancers in the ballroom, their spatial relationships, the directions of their lines of sight, eye contact, as well as the psychological relationship amongst them. In these weaving of individual and collective portraits, in what shapes will the memories and history show themselves up?

“It’s me who failed the footages or did the footages fail me? As if to say, theoretically, there are no banal images, only incompetent viewers.”
– Hao Jingban

Hao’s most recent video work Off Takes originates from the discarded footages from Beijing Ballroom Project. These personal life stories, bound up in the shifting courses of political climates, had once failed to be interpreted because of their historical distance and the absurdity of reality. Through the reorganization and reactivation of these once deselected fragments, Hao meditates on the semiotic and affective relations between image and message. In 2016, the work Off Takes had a premiere debut at the Shanghai Biennale.

Born 1985 in Shanxi Province, China, Hao completed a BA in Media and Communication from Goldsmiths College in 2007, and a MA in Film Studies from University of London in 2010. Her solo exhibitions include “New Directions: Hao Jingban” (Ullens Center of Contemporary Art for Contemporary Art, Beijing, 2016) and “Over-Romanticism” (Taikang Space, Beijing, 2016). Group exhibitions in which Hao has participated include “Prospectif Cinéma: Performing Dramas I” (Centre Pompidou, Paris, France, 2017); “Why Not Ask Again? 11th Shanghai Biennale” (Power Station of Art, Shanghai, 2016); “Discordant Harmony” (Kuandu Museum of Fine Art, Taipei, 2016 and Hiroshima MOCA, Hiroshima, Japan, 2015); “The Civil Power” (Minsheng Art Museum, Beijing, 2015); “Sight and Sound” (Jewish Museum, New York, USA, 2014). In 2016, Hao’s work Off Takes had a premiere debut at the Shanghai Biennale. In the same year, she won the Huayu Youth Award Grand Jury Prize in Art Sanya 2016 with the films An Afternoon Ball and Off Takes from her Beijing Ballroom project. In 2017, Hao won the Young Artist of the Year award at the 11th Award of Art China and the International Critics’ Prize at the 64th Internationale Kurzfilmtage Oberhausen.