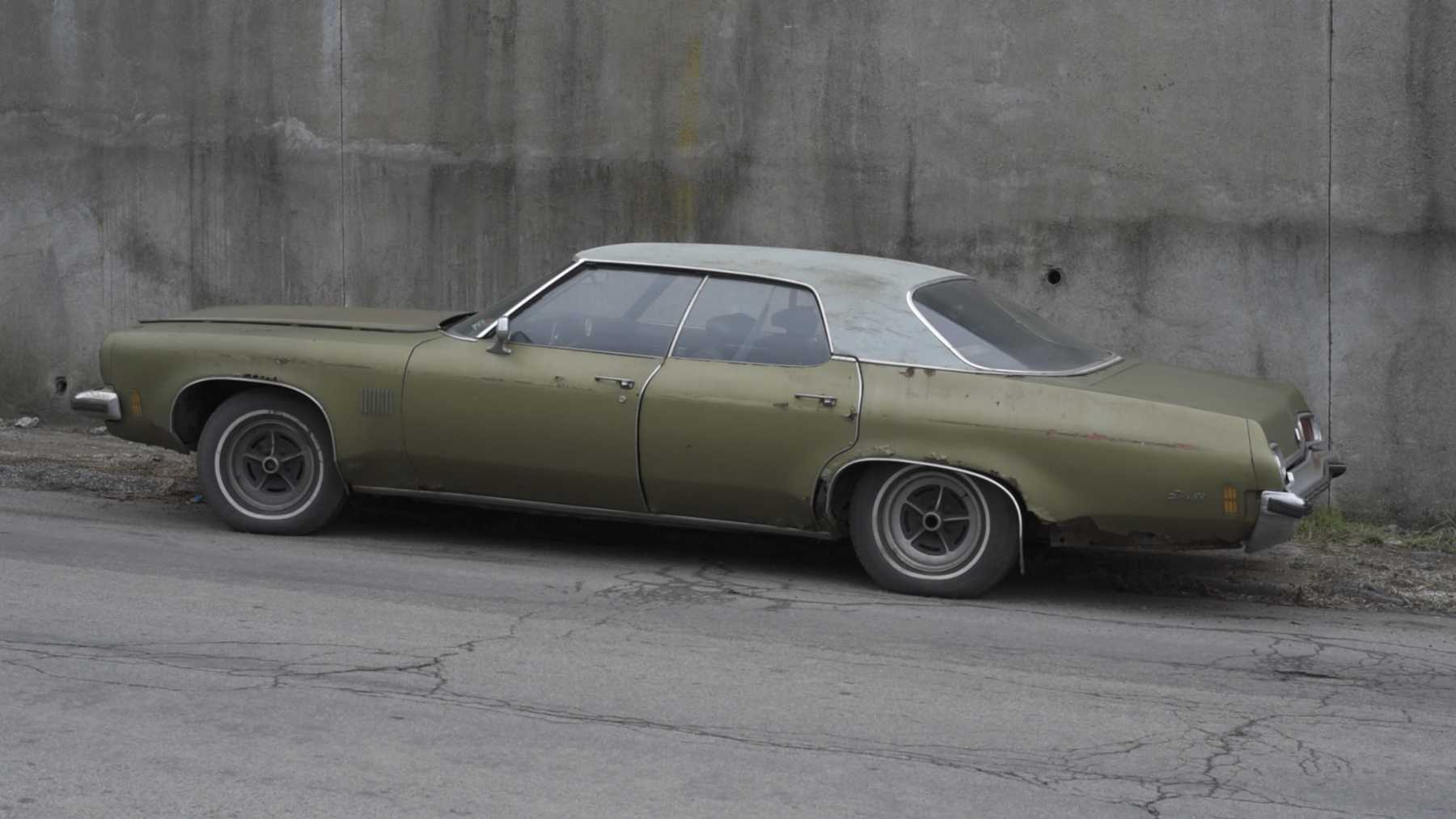 Shot on location in Braddock, Pennsylvania and first shown as part of the exhibition so it is, curated by John Carson, at the Mattress Factory Pittsburgh. The town of Braddock is located in the eastern suburbs of Pittsburgh in Allegheny County, Pennsylvania. The town’s industrial economy began in 1873, when Andrew Carnegie built the Edgar Thomson Steel Works. Braddock became the “cradle of Western Pennsylvania’s steel industry” but like many other steel towns, Braddock’s fortunes changed with the collapse of the steel industry in the United States in the 1980s. As a result of this decline, Braddock has since lost 90% of its population from its peak in the 1920s.

No Return is set in a fictional future where the planet is slowly dying as a consequence of pollution and climate change. No Return extends Doherty’s interest in the relationship between landscape and memory and in working in locations that bear the traces of contested histories and narratives; some forgotten, some half remembered. Many of his works, Ghost Story (2007), Buried (2009), Remains (2013), have evolved from investigating specific places in his native Northern Ireland, as a means of meditating upon the existence of traces of past events that will not disappear, that resurface and cannot be forgotten. Doherty’s approach and process is speculative. He often takes an existing image or other information as a starting point and then proceeds to see what can be discovered or found in the location. At the same time, Doherty’s method is sensitive to the difficulties of working in a contemporary landscape that has been shaped by specific local circumstances and larger historical events.

No Return is concerned with the present rather than the past or the future. The work attempts to engage with the landscape as it looks today, as a repository of the memories of past experiences and as a witness to the ravages of socio-economic change. In looking at the present, No Return imagines and visualizes our shared apprehension about the future.

Willie Doherty (b.1959, Derry, Northern Ireland) continues to live and work in Derry.

His native landscape has been the focus of his work since his black-and-white photographs from the early 1980s. Doherty became known for his photographs overlaid with text, which dealt directly with the language of conflict as it relates to the representation of place. He continues to work in both video and photography as a means to investigate the changing political landscape of Northern Ireland and other countries with contested borders.

Doherty’s photography and video installations have been included in numerous international exhibitions such as “Cocido y Crudo” at Museo Nacional Centro de Arte Reina Sofia, Madrid (1994); “1999 Carnegie International,” Pittsburgh; “XXV Bienal de São Paulo” (2002); the “Venice Biennale” (2007); “dOCUMENTA” (13), Kassel. He has been nominated twice for the Turner Prize; once in 1994 and again in 2003. In 2006, his work was the subject of a video survey exhibition organized by Laboratorio Arte Alameda in Mexico City and, in 2007, the Städtische Galerie im Lenbachhaus und Kunstbau in Münich and Kunstverein in Hamburg collaborated on an exhibition and catalogue, “Willie Doherty: Anthology of Time-Based Works.” In 2010, Doherty filmed for the first time outside of Ireland and this work, ‘SEGURA’ was shown at “Manifesta 8” in Murcia. In 2016, Villa Merkel in Esslingen exhibited several recent and new video works by Doherty. In 2018, Doherty will participate in the inaugural edition of FRONT International, “An American City: Eleven Cultural Exercises,” in Cleveland Ohio.

In 2011, his work was the subject of one-person exhibition at Dublin City Gallery, The Hugh Lane. “One Place Twice: Photo/Text/85/92,” Doherty’s exhibition of early black-and-white photographs was on view at Alexander and Bonin in 2012. From 2013 – 2014 a major survey exhibition of Doherty’s video and photographic works “UNSEEN” was organized by the City Factory Gallery, Dublin and traveled to the Museum De Pont, Tilburg. In 2015, CAM- Fundação Calouste Gulbenkian, Lisbon presented “Again and Again,” a major solo exhibition of Doherty’s video and photographic works. In 2017, The Mattress Factory in Pittsburg commissioned the artist to create a new video work, No Return, which was shot on location in Braddock, Pennsylvania.