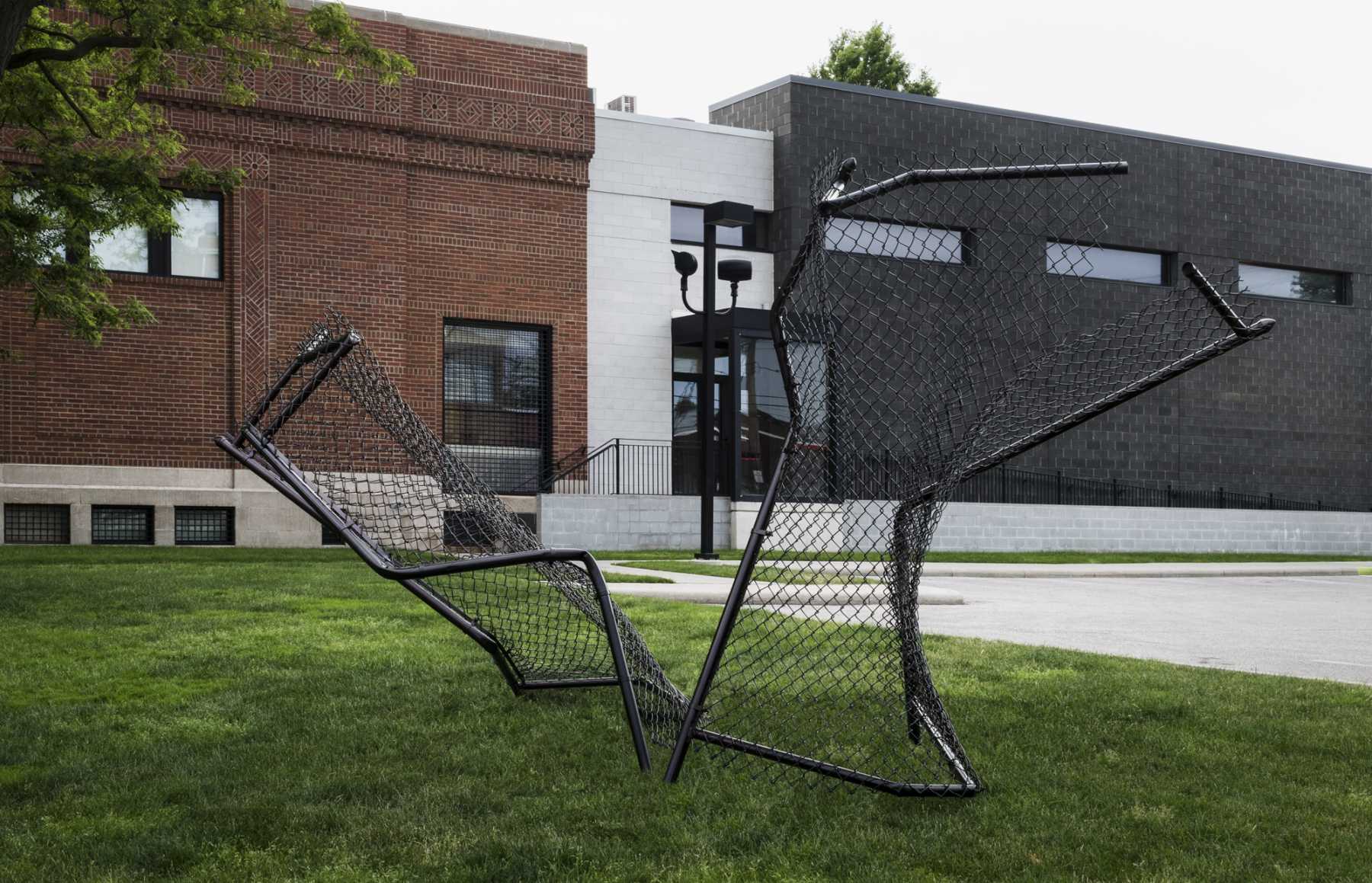 The Dispossessed consists of sculptures of mangled and painted chain-link fencing situated on the grounds of Transformer Station. The building was recently acquired by the Bidwell Foundation and converted into a contemporary art space, becoming a part of the wave of gentrification throughout the neighborhood of Ohio City. Situated at the epicenter of this socioeconomic shift, the sculptures are in critical dialogue with various modes of local ‘revitalization.’ Chain-link fencing is ubiquitous, found on the periphery of construction sites and empty lots throughout the neighborhood. Set in relief against the shifting fortunes and economies of Ohio City, this work reflects not only on the role of fences locally but also more broadly in their use to criminalize the movement of certain bodies. The Dispossessed desires to re-envision these divisive constructions. By displacing the fence from its partitioning function, the sculptures perform as contorted and resonant figures within the landscape.

Using video, installation, sculpture and collaboration, A.K. Burns queries the space between materiality and language. With a focus on the body as a site of social and political negotiation, Burns seeks interruptions and indeterminacy within economies of gender, sexuality, labor, and ecology.

Currently at work on a cycle of five video-installations that take speculative fiction as a point of departure, the opening episode, ‘A Smeary Spot’ (2015) debuted at Participant Inc., NY, and was consecutively exhibited at Portland Institute for Contemporary Art, OR in 2016. As artist-in-residence at the New Museum’s Spring 2017 Research & Development Season, Burns debuted the second video-installation, ‘Living Room’ (2017). And as of summer 2017 Burns is developing a third video, commissioned by EMPAC at Rensselaer Polytechnic Institute in Troy, NY. Burns was a 2016-17 Radcliffe Fellow at Harvard University and a recipient of a 2015 Creative Capital Foundation Visual Arts Award. Her work can be found in several public collations including the Museum of Modern Art, NY and Los Angeles County Museum of Art, CA.

A frequent collaborator, Burns co-founded ‘Working Artists in the Great Economy (W.A.G.E.)’ in 2008 and remains an advocate for labor issues in the arts. Additionally she co-edited ‘Randy,’ an annual trans-feminist arts magazine from 2010-2013, and published a compendium in June 2016. In collaboration with A.L. Steiner, ‘Community Action Center’ (2010)—a video re-imagining pornographic cinema for women and non-binary bodies—screened at numerous venues internationally including the Tate Modern, London and The Museum of Modern Art.